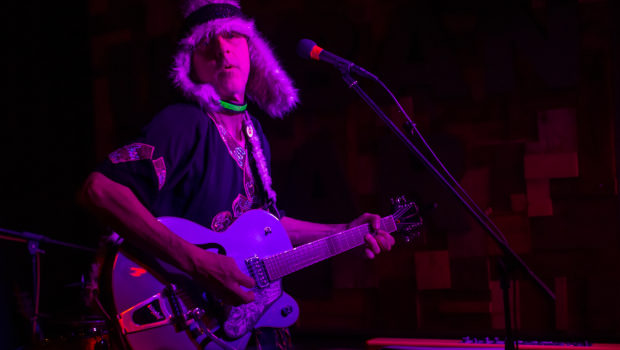 Bob Drake left the USA nearly 25 years ago, relocating to France: “I went touring in Europe with Chris Cutler and Susanne Lewis in the early 90’s and immediately felt at home, it was much less harsh than the USA”, he explained. He spent the 1970’s playing bass in bands in his native Midwest USA, then the 80’s in Denver where he was an active part of the area’s underground music scene, relocated to LA in 1989 where he engineered projects with Ice Cube and George Clinton, then in 1994 moved to France where he carried on engineering and producing albums for many bands, and working on his own solo music, with a style defying definitions – or calling for adjectives like “folk-horror-avant-semi-classical hybrid”. We had a relaxed Skype conversation about his recent and beautiful “almost pop” record, L’ISOLA DEI LUPI (ReR, 2018) but also about the old days with the avant-gard band he was part of, as Thinking Plague, 5UU’s and Hail. 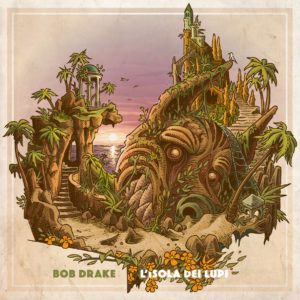 Why L’Isola dei Lupi?
I love Italian gardens and landscapes, architecture, language… I had been reading about old gardens -like Villa Pliniana, and Isola Bella  (Lago Maggiore) and wanted to make a song about a mysterious imaginary Italian garden island, so I thought of Isola dei Lupi. I wanted to pronouce it correctly so I asked my Italian friend Sergio Amadori for an audio clip, as a reference. I liked his voice so much I decided to keep it on the record! Once I finished that song I thought it could be the theme for the album, which immediately gave it a direction. The illustrator, Joe Mruk, loves drawing maps so this was the perfect opportunity. I imagined mysterious places and stories about the island, possibly inhabited by anthropomorphic animals. Joe’s map reinforces that, and details such as the small biplane give the idea of something old.

As for your lyrics: All the (Isola dei Lupi) statues represent antropomorphic wolves. Possibly a metaphor for something, but on the other hand it could all be taken literally. A concept album, then, maybe?
I guess it is! It’s an imaginary place; but you can also enjoy the songs without knowing anything about the overall idea. I also love making references in songs to things or characters in other songs on the same album, I did that on LAWN ORNAMENTS (2014) too, where an evil meerkat is mentioned in different songs… it’s fun and helps tie it all together.

Then, since you already wrote the song On the Chemistries of the Defensive Sprays of the Spotted and Striped Skunks, Isola dei Lupi was invaded by skunks.
I love making songs about animals, and wanted to make one about skunks: I found a scientific paper about chemistry of skunks sprays, and it was perfect. I contacted the author, a chemistry professor at a University, and he gave me permission to use it, So you can be sure it’s all factual information! There is also another story about this song, the horn section: I had just bought a trombone at a charity shop and never played one before. I found 5 or 6 notes I could play consistently and decided to try to write a good progression using those notes. By doing that I learned that it can be very productive and inspiring to set a deliberate constraint and have to work within that frame. 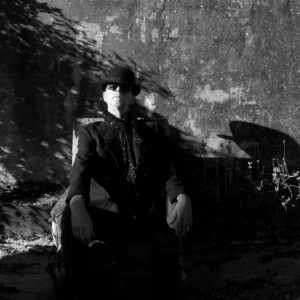 A DIY approach, indeed – you play every single note and instrument in the record.
Everything but the tuba in the intro of The Bridge to Nowhere. I don’t have one, or I might have tried! So I asked Ned “Rhubarb” Wilkinson to do it, he’s really good. For all the rest of the instruments, I love playing them myself even if I’m not very good with some of them.

Then you have to buy a tuba! It is difficult to describe your music – I would say that L’ISOLA DEI LUPI is a collection of “sort of pop songs”: any suggestion to give better coordinates? Psychedelic folk, Syd Barrett, maybe; irony and miniature pop songs someway refer to They Might Be Giants, also – and they also made a pop song out of scientific texts, such as Why Does the Sun Shine? (The Sun is a Mass of Incandescent Gas).
I know who they are but I’m not very familiar with Syd Barrett or They Might be Giants. I’ve heard a few songs from each and they were really good. Defining is difficult, If you have a need to define it, just listen and decide for yourself.

I know you are part of the Cardiacs family: you also was in the line up of the Whole World Window festival together with Kavus (and other Cardiacs friends, such as Sterbus): there are some similarities in the approach, even if their (English) roots are different from your ones.
My friend Kavus Torabi introduced me to Cardiacs in 2012 or so, and eventally I also met Tim Smith, who has certainly been a recent inspiration for me. I’ve had some opportunity to talk with him about music, recording, microphones, sounds, and hope to get to know him a bit more. One of the most striking things for me about Tim’s music is the beautiful melodies – and behind these the surprising, unexpected chord changes which are always completely musical and exciting, with the focus always the melody. I think that’s why I feel musically part of that family with William D Drake, the Larcombe brothers (Stars in Battledress), Sea Nymphs, and so on.

I see this approach also in your old days with Hail and Thinking Plague…
Those were long ago, and like all of us I have certainly learned a lot since then. I was always a good arranger, but when I started trying to make my own music in 1991 I had to learn what it meant to write a song. When I was playing bass or drums in bands in the ‘70s and ‘80s, how it often worked was that we musicians would put ideas together, some funny grooves or riffs. We’d say “OK play that 4 times, play this part 8 times, or two and half, whatever” and so on, and then we’d call it a song, and expect the singer to try to sing something over it. No wonder it was hard to find a singer to come up with a melody… the so-called songs didn’t go anywhere. it’s a completely backwards way of working. Finally I realized what made songs written by singers so much better – they were based on melody and vocal phrasings. And I have no problem if people call my music pop. To me that simply means well crafted, compact pieces of melodic music with sort of rock instruments, but anything goes.

I can hear your attention to melody in the mixing you do for other bands such as Thinking Plague and Hail.
Yes very much! I always try to keep the focus on the melodic elements, and make sure the movement of the notes, harmonies and musical flow come across clearly. Otherwise it can sound like a big mess, or be hard to follow. Especially if the music is very complicated, like Thinking Plague or the Science Group. 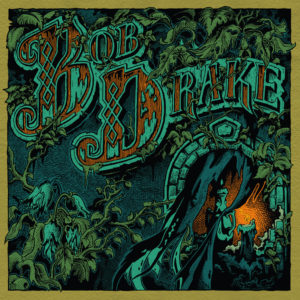 Can you tell us about your own recent discoveries in music, what you listen to?
I don’t have time to listen to much music, as I did in the ’60s and ‘70s – because I am always working on my own or someone elses. I think Cardiacs are one of my most recent discoveries, and I saw many interesting groups when I did my solo tours in the UK though, there is a lot of very good and often very strange music going on! When I do listen to music at home it’s usually very old… like 12th century, haha.

You live in Europe more than 20 years – are you still in connection with your former bandmates?
Mike Johnson (Thinking Plague) is still one of my best friends, we hope that we will do something more together one of these days! Also Mark Fuller is a close friend. All of my old friends I used to play with in Denver I still consider as family.

Do you have any plan for touring with a L’ISOLA DEI LUPI show in Italy?
My solo tours require a lot of time and concentration to prepare, and I love all of that. Between 2016 and 2017 the shows went better and better – but to play this music live requires a lot of concentration, and the quality of my performances was depending too much on how well I could hear myself onstage. There’s not always time for a proper soundcheck, or I don’t take the time to make sure I can hear myself… then I struggle in the performance and start to think about what I’m doing – am I singing too hard, too soft, does it sound out of tune, etc, and that’s the worst thing you can do when you’re performing! I have also come to the conclusion that my solo performances work better in small places, when I can really see the people I am playing for, and don’t need a big sound system. So for now I feel it would be more fun and productive for a while to stay at home working on new songs. But I change my mind pretty easily!  I will tour in April with the Peter Blegvad Quintet, that will be fun and satisfy some of my desire to play live.

Just a quick note about your history: what about the white bear costume you wore in some concerts?
It is a part of me, a kind of fantasy that has been part of my life forever. I always drew and even dreamed about him ever since I can remember. In 2007 I had some extra money so I commissioned a professional mask maker to make the head, based on some of my drawings. It looks exactly like my sketches! I used to go to these fantasy conventions, “furry” conventions, before they became too expensive, with people wearing animal costumes, performing and dancing and just partying basically, But it is very hot and extremely strenous performing in a costume like that, and maybe I am getting too old for it – the last few times I went dancing in the fursuit I ended up with a terrible headache!  But I can still do it for short periods.

And what about the future?
I’ve just started experimenting with using musical notation, for the first time. The next batch of songs will probably carry on in a direction which you can start to hear in songs like Hollowfang’s Tower and Sleepy Critter on L’ISOLA DEI LUPI. 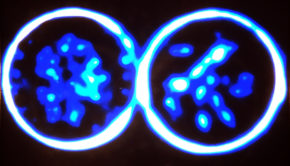 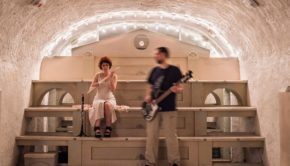 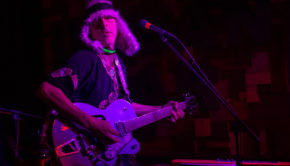