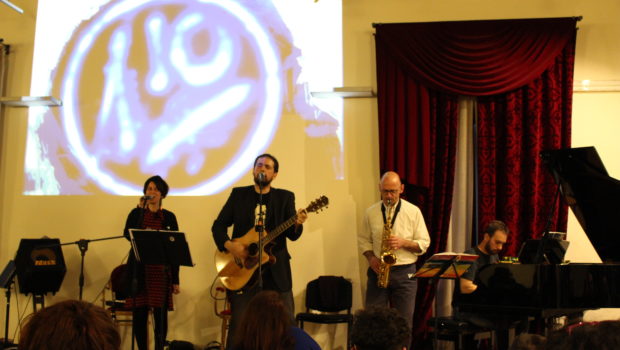 Frank Peternelly – A warm welcome to Emanuele Sterbini and Dominique D’Avanzo. first question: where are you from and what did you do before this album? it’s not your first album. there are some great releases in your history. 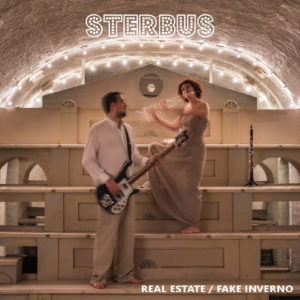 Emanuele Sterbini – Sterbus is from Rome, Italy… I’ve started recording my solo stuff in 2003, while I was playing bass in some other bands. I always wrote my own tunes, and since 2004 I self-released 6 solo albums. Then in 2006 I knew about the bast band in the world, Cardiacs, and that changed sensibly my songwriting. Still, those were just recorded outputs, I never toured those albums with a band! Then In 2013 I’ve been invited to a Tim Smith benefit in Kingston, UK and I had to form a band. Enter now Dominique D’Avanzo, that after that became my musical partner, and we soon started to think about the magnum opus that became REAL ESTATE/FAKE INVERNO) I always had the dream to have Bob Leith of Cardiacs play drums on my tunes, so after years of stalking him, we convinced him to come to Rome and play drums with us!

Frank – Yes, some people can’t think of Sterbus without thinking of Cardiacs: you did some cover versions of Cardiacs songs etc. we will come back to that later. tell us something about the recordings for the new album, please. What’s new about the new album? My favourite Sterbus album was SMASH THE SUN ALIGHT – but the new album is great in a different way. what is the difference between those two fantastic albums? 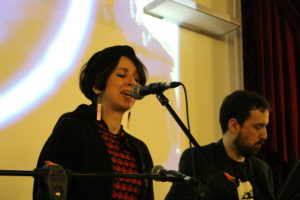 Emanuele – Thanks for liking that one! The differences are quite big really! SMASH THE SUN ALIGHT was recorded entirely at home, in less than a month with GarageBand, programming drums and playing everything else. I only recorded vocals in a proper studio, then I mixed all by myself. Also, I wanted a short record, so it’s just seven fast songs, very Cardiacs inspired in the songwriting. For REAL ESTATE/FAKE INVERNO we went to a real studio from the start. We recorded drums and everything else in a real studio, the DB Recording Studios – DBRS of Francesco Grammatico, and all the recordings took… one year, considering that Bob came the first time in October 2017! Also, for the new album we started from a basis of more than 100 songs, that we reduced to 17 in the end.. so, it’s really the best that we’ve written in the last 5 years… and moreover, it’s really Hi-Fi, recorded with pro-tools!

Frank – When I listen to your music, there are many brilliant familiar things in it. I hear Beatles, Zappa, Blur, XTC, Nirvana, Ride, Cardiacs, The Who and many more for the time of a few seconds. but somehow it is always Sterbus style. how would you discribe your music? What are your influences? 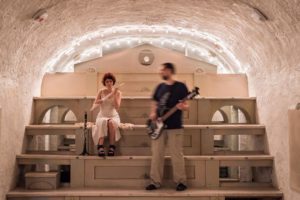 Emanuele – I grew up with my father records so… he used to play me Zappa, The Beatles, Lucio Battisti (probably the best italian songwriter from late sixties-seventies), early King Crimson, Emerson Lake and Palmer, Jethro Tull… he also played guitar, so I grew uo with the sound of the guitar and of guitar chord changes. I well remember my first interest was in how you can change atmosphere with chords and how your body can react to that… When I was in my teens I used to love Blur a lot (and then back discovering XTC), Pixies (and Frank Black work), Foo Fighters… then later, around 2002, I discovered a lot of “indie” bands, like Sparklehorse, Sebadoh, Elliott Smith, Dinosaur Jr, Grandaddy, Wilco, and all of them left something somewhere in my subconscious! I’m not really into Ride, I should investigate more their music! Oh, I forgot Guided By Voices, The New Pornographers, Ween, Phish… all of them are extremely important! At the same time I also developed a love for all things bonkers and in a way extreme, so I am also very keen of some thing metal like Meshuggah, Strapping Young Lad, early Mastodon, Converge. I just noticed I forgot Steven Wilson, he is one of the greats too Then, the records – Crosby Stills Nash and Young DEJA-VU, Procol Harum GRAND HOTEL, Beach Boys PET SOUNDS, Zombies ODESSEY AND ORACLE… my desert island albums!

Frank –  That’s a lot of inspiration, indeed! You mentioned Lucio Battisti, a fantastic Italian songwriter: Ancora tu is one of the greatest songs ever written! Let me ask you about the musical scene in Rome: are there any similar bands to Sterbus there? Or are you quite alone with your musical taste there?

Emanuele – If there are, I don’t know them! Singing in English is something that people seems not to accept… You’re Italian, you must sing in Italian! – like some kind of right-wing political dictate that I just don’t comprehend. Italy is the Country of songwriters with an acoustic guitar and a capo at the moment, and of wanna-be pop-stars. Then, 90% of the work goes finding the right words and whatever you play underneath them is just almost a soundtrack for words. That doesn’t mean that there aren’t good acts going on, there’s a lot of stuff that I do like, but it’s different from what I would write myself!

Frank – Ok, i see. let’s talk about lyrics. what are your themes? 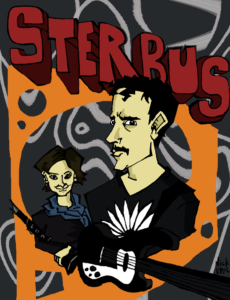 Frank – Sounds like same work-sharing as Army of Moths. another band that is hugely inspired by Cardiacs – seems as if all roads lead back to Cardiacs. Please, tell us about your connection to Cardiacs. tell us about the Pond, pondies etc. There are many interesting musicians among the pondies, and you are one of them. what is happening in this special scene?

Emanuele – Let me first say that Army of Moths are close friends, they both guested on our record! Debz singing lead on (Maybe I’m a) Lioness and David playing a blues guitar intro to the same song. They just released their album SORRY TO DISTURB YOU, and it’s beautiful! To answer your question: I discovered Cardiacs in late 2006, and soon I joined the Marenest Forum, a place on the internet for discussing all things Cardiacs! I first met a lot of pondies there… 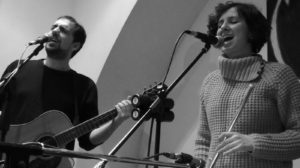 Then in 2007 I flew to London to see my one and – sadly – only Cardiacs gig at the Astoria… then in 2010 I decided to record a cover of Dirty Boy, completely acoustic. Dominique already then helped me with backing vocals. The song has been really well accepted by the Cardiacs fan base… Then we’ve been asked to give the song for THE LOYAL COMPANION, the second limited cd that was going with the tribute album LEADER OF THE STARRY SKYES in 2010. Then a cover of Anything I can’t eat followed in 2011… In 2013 we’ve been invited to the first Tim Smith benefit, then again in 2015 (Kingston), 2016 and 2018 (Preston). We also recorded covers of Fear (Spratleys Japs) and Gina Lollobrigida. At this gigs I met Bob Leith and asked him if he was interested in a collaboration, and the rest – as they say – is history! In all these years – 11! – I made a lot of pondie friends and they are all like a second family to me. Let me just say that Noel Storey, who also played on the album, is one of my best friends, and I’m happy that he’s been in the band last friday, supporting Major Parkinson. Timmy was there, and people told me he liked our set. So, after 11 years… we’re here! It’s been a long journey!

Frank – Yes, Army Of Moths made a fantastic debut album and (Maybe I’m a ) Lioness is one of my favourites on your album. Noel is a nice bloke and very funny (if i’m not wrong). What can you tell us about Tim Smith? How’s he doing? You say that he was in the audience when you supported Major Parkinson (another huge Cardiacs fan). not all of us know the sad story of Tim Smith, leader of Cardiacs. can you tell us some good news?

Emanuele – The good news, in the big picture, is that he’s with us, that his mind is perfectly ok, he understands everything, he’s lucid, and he has people that takes care of him. Let me just leave this link here, so that everyone can read the story and understand everything better…

Frank – Lovely! Back to the album. where can we buy it? Are there plans for a tour?

Emanuele – We’re planning some dates in Italy and maybe some outside of Italy. Let me just add that this album is self-funded and self-produced, with a great help from Zillion Watt Records who helped us to shape it! The album is available only through Bandcamp and you can buy it there directly from us!

Frank – Last question for a drummer. when I hear Maybe Baby, the drums are so Bob Leith, as I know him from his work with Cardiacs. Who made the decision what he plays on the tracks?

Emanuele – When I sent Bob the demos, the drum tracks were already there, at least in terms of stay on the hi-hat, go to ride, crash here and there but then of course he added his own touches… And he’s been fast! No more than two takes for every song. The other important thing to say about it is when he came for the first session in October 2017 he should’ve played only 3 songs but he recorded 5, and when he returned in February he recorded 11 in two days!

Frank – By the way, I saw Bob Leith playing with Cardiacs in Germany in 1997. the greatest concert I’ve ever seen in my life! For one or two songs Jon Poole played the drums and Bob was standing still on the edge of the stage and people threw paper cups at him (in a friendly way). he didn’t make a move. very cool scene that was.

Emanuele – We certainly had a lot of fun moments!

Frank – So that was a nice talk to one great band: thank you very much Emanuele Sterbini and Dominique D’Avanzo for the interview! I wish you all the best! Let me finish this interview with an older song by Sterbus, Flatworms (Eggs of Joy). It’s one of my favourites: it feels like the blue album (1967-1970) by the Beatles, warm and melacholic… thanks for the music!

Dominique D’Avanzo – Thank you, it was a real pleasure! And that song is quite good for the ending credits too!

Emanuele – What she said! Thanks for having us! 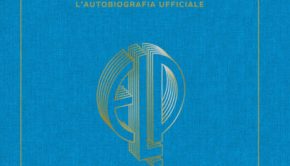 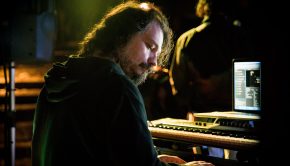 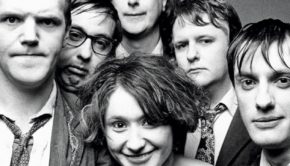 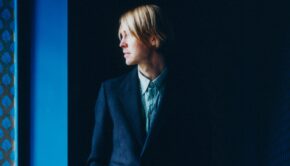